A Saturday ride through quiet countryside

I went for a ride through the countryside yesterday. It took just an hour and a half to make a ride from home, through one of the heaths nearby, and back again. In Drenthe, it's very easy to find somewhere quiet to go for a few minutes:


There are many stiltegebieden or "silent areas" within easy cycling distance of Assen. Even though they are just a short distance from the city, they are about as quiet as it is possible for anywhere to be. The cycle paths don't stop at the city boundary, but continue in all directions through the countryside, so every location can be reached without having to ride on busy roads.

We came to live in this part of the Netherlands because we found it to be both beautiful and wonderful to cycle through. Our routes go through all the most scenic parts of the area. Book a holiday and you can experience it for yourself.
Posted by David Hembrow at 17:17 No comments:


Judy and I went out yesterday evening to plan a new cycle holiday route. It's a time consuming thing to do as we have to stop at every corner and note what is around so that unambiguous instructions can be written for our clients. Nevertheless, I also managed to get a bit of video of Judy as she rode.

We now have a new shortish family friendly route to one of the swimming beaches in Drenthe. On the way, it passes over another "stiltegebied" or "silent area" where there is little, if any, noise other than that from nature. There are ten of these areas in Drenthe, most of them not far away to cycle. This is possible because the noise from traffic has been dealt with remarkably well.

If you'd like to ride this route for yourself, please get in touch with Judy to book a holiday.
Posted by David Hembrow at 16:10 No comments:

Email ThisBlogThis!Share to TwitterShare to FacebookShare to Pinterest
Labels: drenthe

Cycling Province of the year 2011: Drenthe 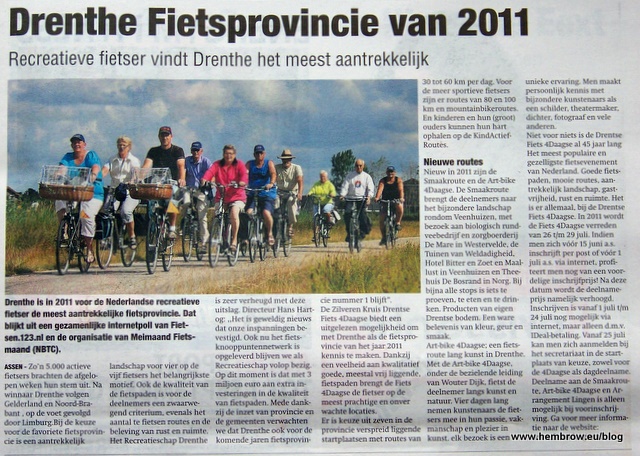 Our local paper reports that Drenthe has been voted as cycling province of the year for 2011. They say that "Recreational cyclists find Drenthe the most attractive". Who are we to disagree. We live in Assen, the capital of Drenthe, and it is from here that we organize cycling holidays.


5000 people voted in an online poll, giving a score for such things as the attractiveness of the countryside and the quality of cyclepaths. Drenthe scored well due to the amount of space (it's the least densely populated part of the country) and quietness.

Drenthe really is a fabulous place to cycle. That's why we moved here and why we're sure you will enjoy your cycling holiday in this province.

Posted by David Hembrow at 16:06 No comments:

Yesterday was Koninginneddag. It's a nice event, very sociable. Judy and I decided that instead of staying in Assen we'd go to the village of Vries this time, have a couple of beers at the cafes, listen to a friend's music, and take part in the cycle ride which one of the cafes had organised. This was 33 km long, to be taken at a fairly relaxed pace.


We made a video showing some of the other participants in the ride we were taking part in.

Many of the riders were quite elderly. Over 65s make a quarter of all their journeys by bike in the Netherlands. They don't only ride short distances to the shops and back, but also quite often go for tours in the countryside. Retired couples are often seen on matching "his and hers" bikes, and increasingly these days they'll buy electric bikes to make tours like this a little easier. The Netherlands is accessible by bike for people of all ages.

To the German border and back


This video was made on Monday afternoon two weeks ago when I rode to the German border and back. I made the journey because we've a holiday customer coming in a couple of weeks who will take this route. I realized I had not ridden it for over a year, and it's important that we keep our routes so up to date as possible.

Bourtange is a star shaped fortress and village dating from the eighty years war between 1568 and 1648. At the time it was militarily important and guarded the only road between Germany and Groningen. Now it's a living museum.
On the way to Bourtange I stopped a couple of times, to eat sandwiches, to take a look at some willow trees, to look at a deserted beach (Monday afternoons in April are not peak time for sun-bathing).
I didn't really need to carry on from Bourtange into Germany. It's not part of our route. However I thought it would be nice to have a German beer at the furthest point from home before turning around again. However, the owners of the cafe I stopped at had other ideas. It was shut. I've called past the same place a few times now, and never managed to get any refreshment at all. There are also cafes in Bourtanges itself and at other places along the route. That was the furthest I had any reason to ride, so I turned around and headed home again. A 120 km afternoon bike ride, including a trip back in time and to visit a foreign country, a few stops for food and drink and to take photos, and I was back in time for dinner.

Note the siren sounds in the video. If your holiday coincides with the first Monday of the month then you may well hear sirens at mid-day. It's nothing to be alarmed about, they're just tested once a month.
Posted by David Hembrow at 15:45 No comments:

Photos from the last few days

A few photos from the last couple of days. First, a page out of the latest Vogelvrije Fietser (Fietsersbond magazine). Subscribe to this newspaper for a year and you get a free bike. Not a bad deal.

This month, the Vogelvrije Fietser also linked to our  bell test from a few months back.
Posted by David Hembrow at 15:42 No comments:

Self-led and guided cycling holidays in the cycling province of the Netherlands:

Come and see for yourself how policy and infrastructure in Assen and Groningen have lead to the high cycling modal share in this area: